It Looks Just Like That Guy I've Never Heard Of.

My whirlwind month of being the poster kid for Turner Classic Movies' "Summer Under the Stars" series is coming to a close. Lots of people have been taking the time to not only find out who the artist is behind the portraits (TCM decided to keep it a secret to protect me from assassins), but to write me to say how much they enjoy the work. It's been the sort of experience that restores one's faith in humanity, like when a cop jump-starts your car instead of tazing you for vagrancy.

One request I've gotten a few times is to show more of the "how I done it" process on my blog. I generally like to keep the recipe under wraps, lest al-Qaeda begin developing superior caricaturing strategies, but who am I to keep my miserable, desperate doodling away from those so eager to ridicule it?

So, let's talk about Lee Tracy. You know him, you love him...okay, you don't know him. And neither did I. He's a Hollywood star who didn't leave the lasting impression that, say, Fatty Arbuckle did. But let's be honest: When capturing the likeness of someone nobody has ever heard of, it can sure take the pressure off.

We start with a Google images session. Corbis is useful, too, and screen shots of Youtube videos can be even better. A caricaturist has a lot of options these days. It sure beats my early years, when one half-inch photo in the back of an old Entertainment Weekly was the best I could find. Turns out Lee Tracy had a splendid mug, but as usual, still photos online don't reveal the face like his actual films do.

So, most of my rancid preliminary doodles come from pausing an old Lee Tracy movie (either online or on DVD - I can't remember). This part of the process looks like I'm drawing with my foot because I'm not really looking at the paper while I'm drawing. I'm just scanning the face on the screen for information. Sometimes this gives me accidental results, which I convince myself are divine acts of genius instead of the stupid mistakes they actually are. For example, the sketch on the upper left has one triangle eye. For no reason at all, I decided this would seem extremely clever if worked into the final piece. And since you don't know who Lee Tracy is anyway, you can just assume he had one triangle eye as the result of some mishap with farm machinery and was world-famous for this distinctive feature.

I work out a few pages of frantic face doodles before I decide I'm in the general vicinity of Tracyville. With a deadline looming, I sometimes decide to start working on the finished composition, hoping the likeness can be reshaped and salvaged in the final drawing. This is exactly how da Vinci worked when he was drawing old Hollywood films stars, so I feel okay about doing it this way.

At one point in "Bombshell," Lee Tracy leans in through the window to trade wisecracks with female drag queen Jean Harlow, so this is what I decide to draw.

Now I've got a little thumbnail rough that I scan and blow up on the computer machine. God bless this digital age. It's allowed anal-retentives like me to over-complicate everything we do in even greater detail. This begins a cycle of scanning, printing, and refining rough sketches that can go on for dozens of stages. After all, the perfect piece of art will be the one I never have to actually finish.

And so this is maybe about a stage-four rough, with much restructuring of the face. Note the distinctive triangle eye has reappeared. Pure cartooning genius. I should draw with my foot more often.

A few rounds of obsessive scanning and sketch-cleaning later, and I make the ink line drawing that will be used as the final digital piece. I need to remember to get rid of those poofy bits on the bottom of Jean Harlow's girly curtains. 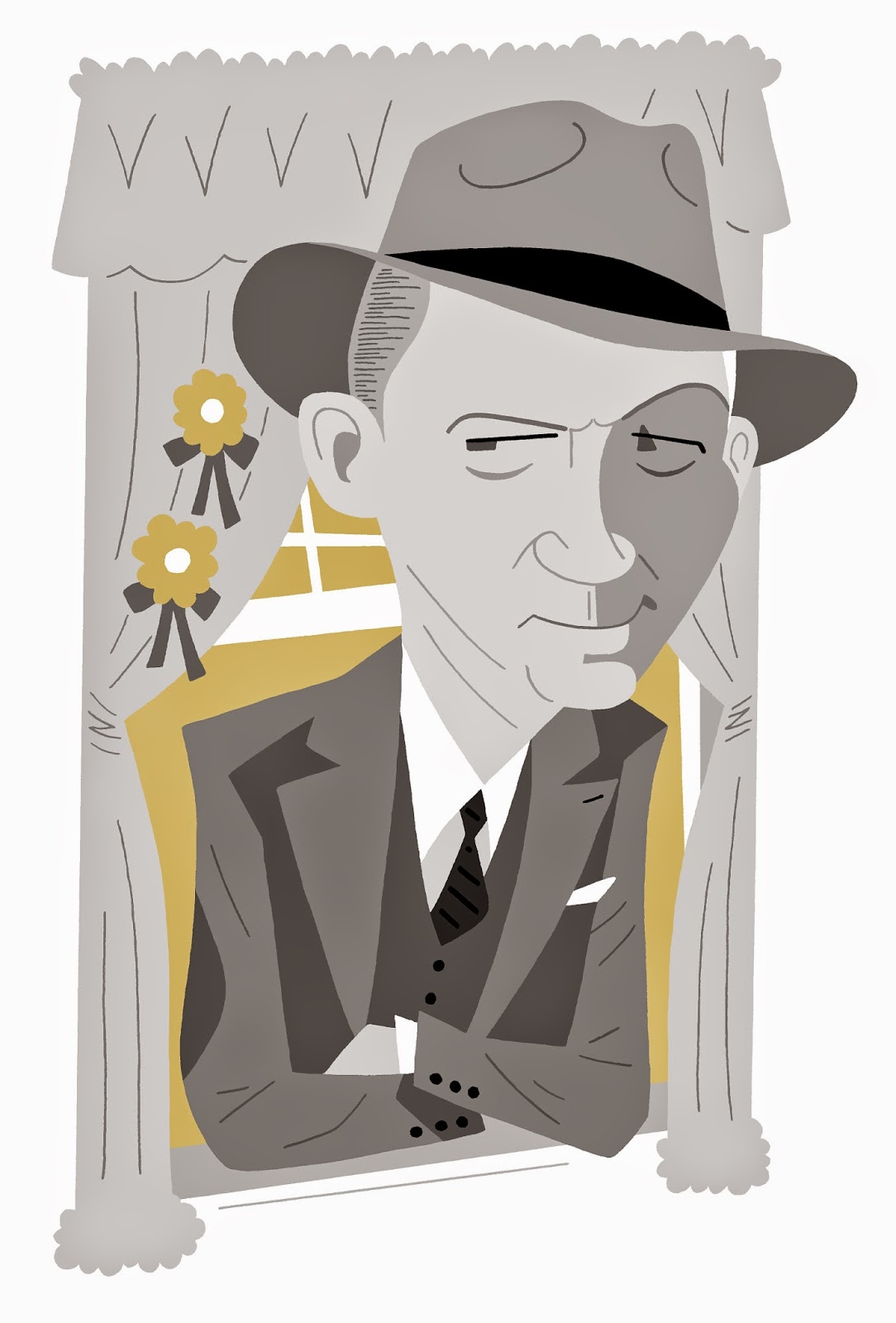 But of course I didn't remember to get rid of them. I also forgot to extend the stripes to the edges of his tie. And one side of his hair is white and the other is grey.What do you want from me? I'd already drawn about 25 of these things and hadn't slept properly in weeks.